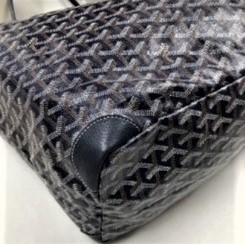 Goyard was originally founded in Paris as a luxury trunk-making company for the French Aristocracy in 1792. It was originally called Maison Martin after its founder Pierre-François Martin, then later named Maison Morel, after Martin’s son-in-law took over ownership.

The company was ultimately purchased by François Goyard in 1828, and the family owned and managed it until 1998, when it was acquired by Jean-Michel Signoles, a French businessman who has turned the company into an international luxury brand.

The designs offered by Goyard include trunks, large totes, duffle and travel bags, wallets, belts, and numerous other accessories. The company sells its products in its own stores and in a small, select group of luxury retailers worldwide. Goyard also offers a line of leather products for pets.

Our craftsmen can add leather corners to cover worn or torn material on the bottom, or sometimes tuck in the corners to eliminate these worn areas. We can also reseal the edges of the handles when they begin to peel or crack, or custom-make a completely new set of handles to match the originals. If your custom monogramming needs a touch-up, our in-house artists can help with that too.

Goyard® and its related patterns, designs, and logos are owned or licensed by Goyard St-Honoré and protected by international trademarks, copyrights, and patents.